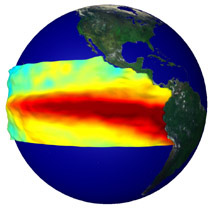 NOAA issued an official planet-wide “El Nino Watch” today.  But what does it mean???  They say the odds have increased to 50/50 that El Nino conditions will develop in the tropical Pacific Ocean.  That’s a warming of the ocean waters; which leads to changes in weather patterns all around the globe.  You can read all the technical details here.

The possible development of a new El Nino isn’t a surprise, considering climate models have increasingly been hinting we could slip into it the past few months.  The two-year long 20010-2012 La Nina died late this past Winter and Spring, so we are in “La Nada” territory right now.  NOAA likely issued the press release today since starting in June the models tend to do much better at predicting the future state of El Nino/La Nina compared to earlier in the year.  They are notoriously unreliable from February through May each year; that was reinforced by a talk at the Pacific Northwest Weather Conference this Spring up in Seattle.

How will this affect summer 2012?  To be honest I have no idea.   And a good correlation between summer weather and ENSO (El Nino/S. Oscillation) has never been found.

So, for fun, I plunged into the record books.  Since the early 1960’s we’ve only had 5 summers in which we were transitioning from a La Nina winter to an El Nino winter afterwards.  Here is what happened:

Of course this is a very small sample AND we don’t know yet if an El Nino is actually going to develop.

Warmest Spring on Record in USA

NCDC says March-May was the warmest on record here in the USA.  As mentioned in a previous post, that wasn’t the case for us and we were wetter than average.  But just about every other part of the country has been quite warm.  Notice how much of the USA has the bright red, indicating “Record Warmest”: 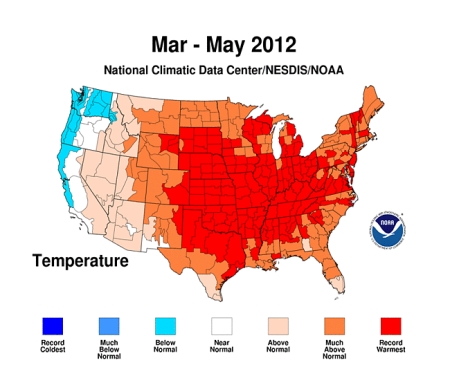 That’s not the only warm weather record.  So far, 2012 is the warmest year on record here in the USA.  The “record” goes back about 110 years. 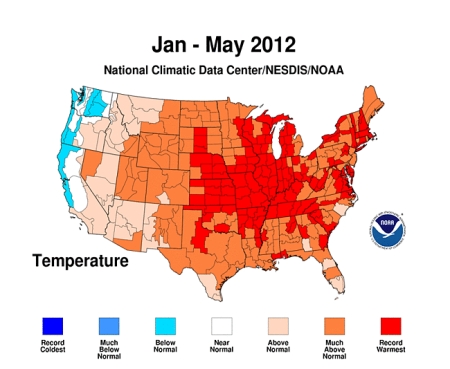 Here is a summary of the “Warmest” USA records

The complete report is on the NCDC website here: