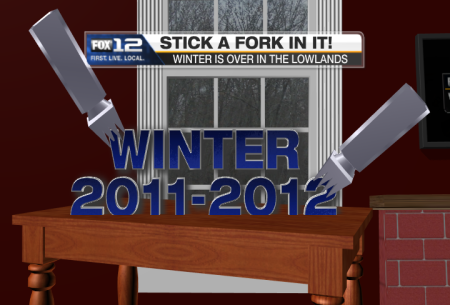 I have enough confidence (after perusing maps & models) this evening to safely say that winter is over here in the lowest elevations of southwest Washington and western Oregon.  So what the heck does that mean?  There is no sign of an outbreak of cold arctic air in the next two weeks (through the end of February), and strong hints that doesn’t even occur in the three-week period ending the first weekend of March either based on the 15 day runs of the GFS/GEM/ECMWF models.

So it’s probably better wording to say the THREAT OF WINTER WEATHER in the lowlands is finished: 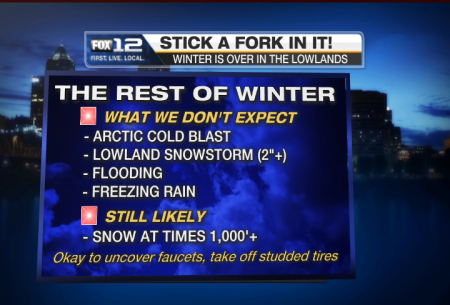 Without the blast of cold air from the north, a prolonged cold spell, or significant snow or ice storm won’t happen.  Also, with no heavy rain through the end of the month and low snow levels most of the time, we are done with flooding too.

So this is likely going to go down as a La Nina Winter without an outbreak of cold arctic air here in the Pacific Northwest…although that hasn’t been too unusual lately.  Assuming we don’t have a freak occurrence in the next 3 weeks, only 1 out of the last 5 La Nina winters have produced an arctic outbreak (last winter, 2010-2011).    The 5 La Nina winters before that all had at least one event.  Strange eh?

So what is still on the way?  The LONG SPRING begins…several episodes of snow down to at least 1,500′ over the next two weeks, possibly lower about a week from Friday and maybe in the last couple days of the month.

Could we still get snow here in the cities such as Longview, Vancouver, Portland, or Salem?  Sure!  But it would be a brief wet snow that is on the lawns in the mornings and gone in the afternoon…similar to what we saw for a few days late last February.  But as of now that is unlikely in the next 7-10 days at least.

So go ahead and turn on your outdoor water, uncover the faucets, and for the love of all things weather, please take off your studded tires if you have no plans to leave the lowest elevations in the next 3 weeks.  I just turned on my outdoor faucets today.

Those of you looking at maps/models closely probably wonder why I would “pull the plug” on winter when the 12z ECMWF showed arctic air quite close at Day 10?  I almost decided against doing it today, but then noticed two things:

1.  The ECMWF 850mb ensemble chart showed only 1 or two members out of 51 going for anything colder than about a -8 degree temp.  Also, note that the average gradually rises after Day 11. 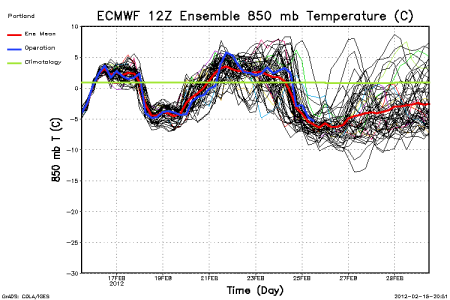 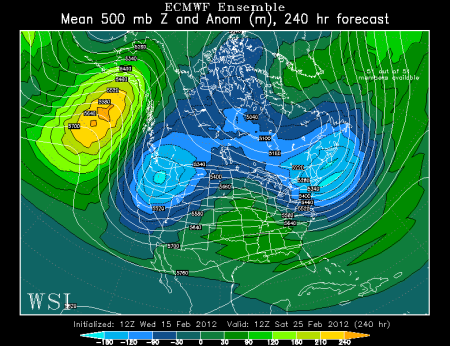 Looks great doesn’t it? Strong ridge way offshore and a cold trough that has dropped right in over the top of us. But it’s a transient pattern; here is Day 15 (5 days later): 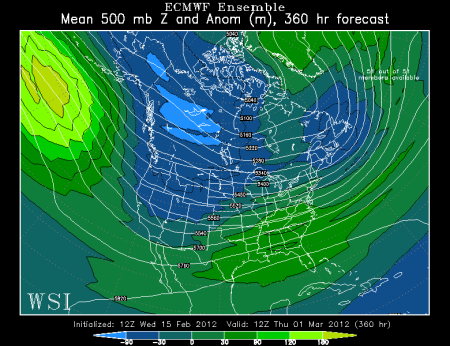 The ridging has flattened and shifted much farther to the west, trough has filled, and we are back to just a little cooler than average on March 1st.  Not unlike what the 00z GFS shows, lots of cool troughs coming at us from the west beyond Day 10 with hilltop and foothill snow at times, but just cool rain showers in the lowest elevations.  This is a classic late winter/early spring La Nina pattern.  Yes, I realize the GFS has been unreliable much of this winter, but in this case it’s quite similar to the ECMWF the past few days.  This pattern (beyond Day 10) is also what the ECMWF has been showing for several weeks in the weekly maps too.

Hot off the press…the 00z GFS ensemble chart showing the dips in the 850mb temps as the cold troughs come through with -5 to -7 degree values.  One this coming Saturday, then 6 days later (next Friday), then again 4 days later on the 29th.  Followed 3 days later by one more….you get the idea.  You can infer that some ensemble members must be trying to build the ridge closer to us beyond Day 10 since some of the values are up in the 0 to +10 range. 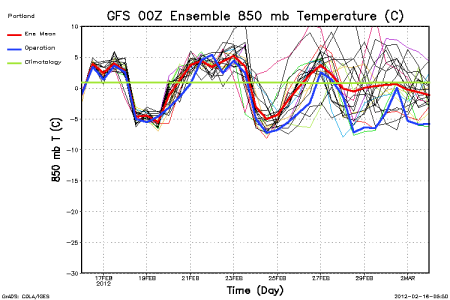