A little less than 5 years ago (Oct ‘2007) an OPB documentary Forecast Cloudy was produced about Global Warming, television weathercasters, climatologists and the relationship between the three.  All 4 chief meteorologists from Portland TV stations were featured in the piece.  My 7 year old son made it in as well!  It was actually a really good documentary…well done.

At that time I figured I should get my thoughts on “paper” because I knew lots of folks would be asking my position.  I did, and ever since that time the link has been sitting on my weather page at this location.

I just went in and took a look for the first time in years thinking “what DID I say back then?”  After reading it, I don’t think my opinion/thoughts have changed much in all that time, so I added a short update you see at the bottom of the page.

Can I summarize my thoughts in a few sentences?

One thing that does bug me is all the misinformation or “cherry-picking” of data.  Here are 4 of my favorites:

1.  Global Warming has stopped, the planet is cooling!  So how many years are they using to support this?  3, 5, 10, 12?   I love this graphic from www.skepticalscience.com : 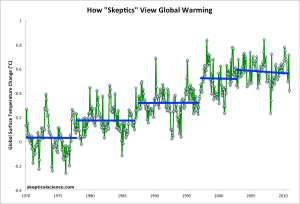 I think this one (without the “escalators” added in) might have been used at the AMS talk two weeks ago here in Portland; I wasn’t there though.  Now if temps stay steady or drop for 20 years, then I’ll definitely be shifting over to the other side!  Always be willing to look at data and be willing to change your opinion. 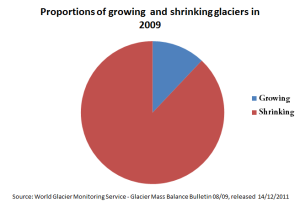 3.  Cascade Snowfall has declined 20% the past 50 years…bad news!  Not true at all, as George Taylor pointed out in his talk a couple weeks ago.  In fact SNOTEL sites show very little change for most locations since 1950 from the data I have seen.

4.  Global Warming is causing more and stronger hurricanes.  Probably not true, as I mentioned in a blog post June 2010 after visiting the National Hurricane Center…”Research shows that the NUMBER of tropical cyclones may actually go DOWN with a warming ocean/climate.  The reason is models forecast stronger shear in the tropics which would tend to inhibit formation.  However, storms would likely be a bit stronger…one study says 3% higher wind speeds.  So no, there is no forecast of “catastrophic” storms in the future”.

My point in bringing up these arguments is that you too, as a reader of scientific information, need to be very skeptical about poor arguments and incorrect information.  Debaters are out there looking for any one fact to prove their point.  I remember last winter it was a constant drumbeat from the “unconvinced” that the rough two winters back east showed that global warming was a pile of cow dung.  You can’t do that and you sure can’t say this mild winter is caused by global warming.  We’re talking LONG TERM temps, not 1, 2, 5, 10, or even 20 year trends.

Feel free to discuss, but again, please leave politics out of it.