This one comes in late tonight and tomorrow morning…but it won’t be nearly as wet as last week’s deluge.  Check out our RPM rain forecast. 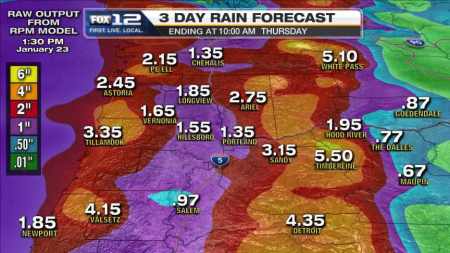 Luckily just an inch or so here in the Valleys tomorrow and Wednesday.  Heavier amounts in the Coast and Cascade Ranges could set off minor river flooding on either of the usual North Coast Range rivers (Wilson & Nehalem).

No signficiant wind coming up with this system other than the usual gusts 50-65 mph on the coastline, much lighter here in the Valleys.

There WILL be another shot of snow in the central/eastern Columbia River Gorge.  Plenty of snow cover to the east, a cold night, then precipitation moves in over the cool air around 8am.  Model soundings say snow is possibly from start to early afternoon.  POSSIBLY a period of freezing rain in the late afternoon; no dramatic warming until late tomorrow night with a return of the west wind.  So I see 3-5″ possible for Cascade Locks to The Dalles from 8am-3pm.

Starting Thursday, it appears we are headed for a big slowdown in the weather again, similar to what we saw for the 7 weeks before mid January.  A few weak systems for very light rain here or there, but that’s it.

The GFS (a bit unreliable this winter in my view) shows strong ridging off and on over the next 2 weeks.  The ECMWF isn’t quite as much a “blowtorch”, showing occasional systems moving inland and no real strong ridging.  Both say little or no chance for lower elevation snow, no arctic blasts, and no windstorm/flooding events.

Here are the two 850mb ensemble temp charts for the next two weeks from both the GFS: 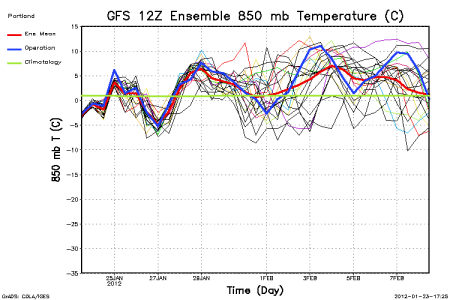 and the ECMWF, note they both have some sort of chilly troughing (briefly) about 8 days from now, around the 31st.: 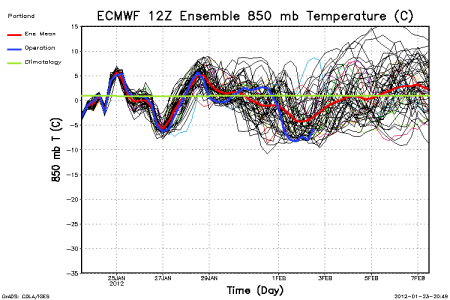 This entry was posted on Monday, January 23rd, 2012 at 5:27 pm and is filed under Weather. You can follow any responses to this entry through the RSS 2.0 feed. Both comments and pings are currently closed.