For those of you just checking in and not wanting much detail, here’s what I have for you:

Okay, now on to the details again:

Models have speeded up the timing once again, with precipitation starting as soon as late morning Saturday.  Of course the possibility is that we’ll have cold spots leftover from tomorrow night’s cold temps, so we could even get a few spots of freezing rain very briefly since it’ll be so warm above.  Just a slight chance of that; I wouldn’t worry about it for now.

Cold front comes through Saturday afternoon, then from sunset Saturday to sunset Sunday it’s off/on showers with the sticking snow level at or close to the lowest elevations.  As mentioned in previous posts, it’s sure cold enough for snow to stick, even with onshore southwesterly flow.  But look at the precipitation forecast from our RPM: 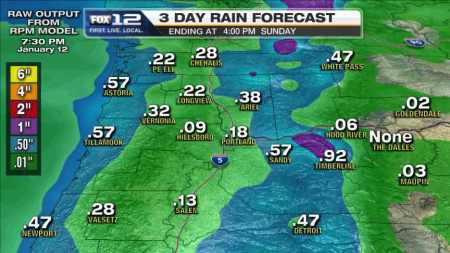 That’s the TOTAL for the cold front AND the showers!  Clearly the better chance for and inch or more of snow is in the hills partly due to it being slightly wetter up there.  Here’s the 4km WRF-GFS 24 hour snow forecast ending Sunday afternoon:

If we get incredibly lucky, a weak low spins down the coastline Sunday afternoon and gives us a quick dump of 2″ of snow, but that’s not in the plan for now.

Sunday night we dry out, and with partial clearing plus calming wind it could be a very chilly night.  We’ve got 28 for a low, but that could even be high if skies clear out.

Monday should be a very chilly day with clouds thickening up and showers developing again the 2nd half of the day as milder Pacific air begins overrunning the chilly air in place.  Monday night through Tuesday morning will be very marginal for snow in the lowest elevations (could just be snowflakes with temps hanging in the low-mid 30s all night).  Then a gradual warmup Tuesday as a much strong system approaches from the west.

A deep low pressure area moves from SW to NE offshore later Tuesday and Wednesday.  I just compared the 135 hr WRF-GFS (based on the GFS model) with the 147 hour from this morning’s run for Wednesday.  They are almost exactly the same!  Here they are:

Notice the strong southerly gradient up the western valleys.  If this happens, we’re going from near-snow Tuesday morning to 50 degrees by Wednesday morning!

I’ve kept the 7 Day forecast cooler than that in a nod to the ECMWF and GEM models showing the whole pattern slightly (ECMWF) or much (GEM) farther south.  To be honest, I thought the GFS would come in farther south like those models this evening.  It’s quite stubborn this time around.

One additional bit of info: 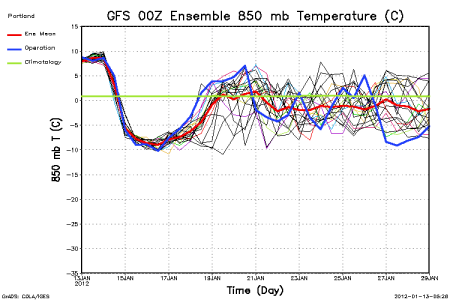 The 00z GFS ensemble chart shows some doubt later Tuesday and Wednesday.  4 of the 21 members show significantly colder, probably with the surface low coming in much farther south.  Interesting…can’t wait to see the ECMWF!

Wait! And one more…the 00z GEM (Canadian) has a deep low tracking directly over PDX with southwesterly windstorm likely right after this image: 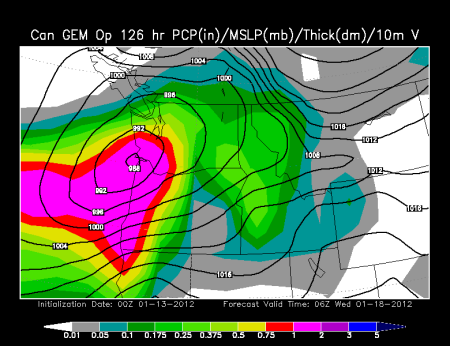 Still plenty of excitement beyond that.  The 00z GFS has a deep  passing nearby on Friday too.