It was a very warm January morning/midday for most areas on the eastern side of the Willamette Valley and up into the Cascade Foothills: 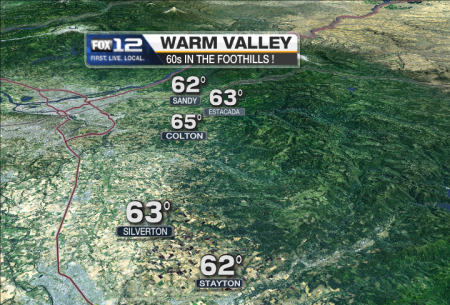 Low 60s were widespread.  And check out the record highs east of the Cascades.

Downtown Pendleton’s high of 70 was only one degree shy of the all-time January record.

AND, the 00z GFS is back to the usual programming, some sort of split flow or ridging through the 10-15 day period.  Hope you saved some nice screenshots of the 18z!

That was fun eye candy…did everyone see the 18z run of the GFS?  Coldest arctic outbreak across the Pacific Northwest since maybe 1989 or 1990.  And it’s only 13 days away according to that model.  Ha!  I’ll believe that when I see it in the more believable 7-10 day range.  Here’s the 500mb chart at Day 15:

It’s a massive, sprawling Hudson’s Bay low that shifts westward across Canada, sending cold air down across the northern 1/3 of the USA.    As I said, great eye candy, especially if you look at all the 18z ensemble runs:

Each line represents one of the 21 versions of the 18z GFS run out to 16 days. The blue line is the operational run, showing temperature, in Celsius, at about pass elevations.  For example this model claims the air temperature would be a few degrees below zero up there!

This run (the maps we see) is out there all alone with the massive surge of cold air.  Several other runs are cooler than average, but none to this extreme.

It’s showing lots of runs a bit cooler than average, but none have a big arctic blast.

To wrap it up; it still appears SOMETHING will change in the 2nd half of January, we just can’t say to WHAT and WHEN and if it even involves anything other than slightly wetter and cooler.