Mountain snow has been even heavier than expected; Automated sensors show about 22″ new at Mt. Hood Meadows since yesterday morning and possibly 26″ up at Timberline!  That’s 2 feet already with more to go!

The snow level did drop a bit further overnight, and the freezing level right now is around 1800′ over Portland based on the top of our transmission tower (1900′) at 31.8 degrees this morning.  That’s a very chilly airmass.  When you get heavy showers at that temp, sticking snow can push a good 1,000′ lower. 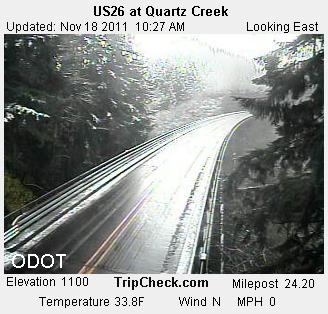 For the rest of today, sticking snow should generally remain well above 1,000′ with the minimal daytime heating.  But anyone could see flakes mixed in the rain or just plain flakes with such a chilly atmosphere.  There are no travel concerns in the lower elevations through this evening here in Western Oregon.

Tonight there is a little “fly in the ointment” as they say.  First thing I noticed on the satellite looper this morning is that low pressure center offshore is farther south than models showed it placed.  It’s a minor but important detail.

I’ll be at work a bit early this afternoon, eagerly awaiting our 18z RPM run to see if it shows the low coming inland farther south as the two UW mesoscale models show.  More later…

This entry was posted on Friday, November 18th, 2011 at 10:43 am and is filed under Weather. You can follow any responses to this entry through the RSS 2.0 feed. Both comments and pings are currently closed.

107 Responses to A Cold Friday; Big Snow in Cascades