Is it going to snow in Portland in the next 7 Days?   Read on…

For those of you not interested in a long & detailed explanation, here’s a summary:

Very little has changed in the outlook since I last posted on Friday.  A cold upper level trough is still progged to drop in over us later this week.  The only significant change has been a slow warming trend in the models.  That’s very noticeable for Thursday, where at one point models were showing 850mb temps down around -7 degrees Celsius.  Now at best it’ll be down around -4; we saw his last week.  So maybe snow down to around 2,000′ late Thursday.  Strong westerly flow ahead of the trough should give us maximum orographic lifting, meaning heavy snow in the mountains.  Thursday should be the big day for that.

By Friday the whole trough is moving overhead with some showers still around, but probably not too much precipitation of any sort.  Friday morning should bring snow showers sticking down to maybe 1,500′.

Saturday is a question mark since some models show another surface low pressure area sliding down the coastline towards California far enough offshore to keep us dry.  My gut feeling is that it’ll be a dry day; just partly cloudy and cool.  But the 12z ECMWF brings the low much closer for precipitation.  Since we will have lost the mild southwest wind, it’ll be easier for the snow level to drop a bit lower.  Still, only the ECMWF shows this.  The 12z and 18 GFS are dry, with the 18z showing a few light showers in the Cascades (showing up in the extracted data).  On the other hand (Fiddler on the Roof?) the ECMWF is a great model, in general better than the GFS.  So, it’s back to a question mark Saturday.

Monday and the rest of next week look just plain wet and windy with lots of mild westerly flow.

On another note, Brian and I were talking today about how information can be easily misinterpreted.  Here’s a great example; this is the ECMWF 3 Day snowfall forecast.  Now the resolution that comes through our system is 100 km, but the actual ECWMF runs at a higher resolution.  That refers to spacing between grid points as the model runs. 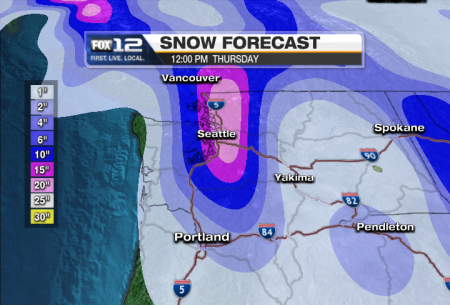 Wow!  It’s forecasting up to 2″ snow by midday Thursday in Portland and maybe 20″ in Seattle!  That’s crazy!  It’s not quite what you think though.  Check out our RPM model which runs at a 12km resolution…that’s a much tighter mesh and you can see what’s really going on: 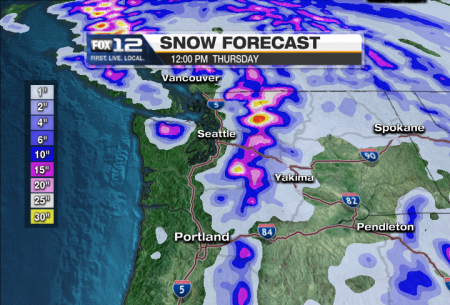 The ECMWF model didn’t have high enough resolution to resolve the details of the terrain.  Now part of the smoothing above is just due to the algorithm in our program too, but you get the idea.  Don’t try to read too much into any one weather map.