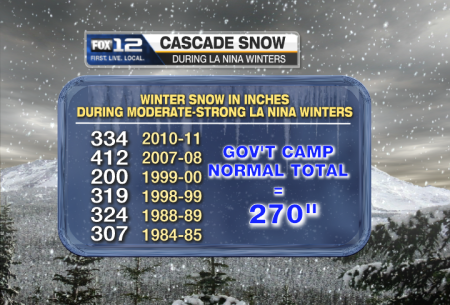 A real slow evening in the weather center; but it gave me some extra time to work on weather graphics.  That includes this one.  Anyone who follows weather closely here in the Pacific Northwest shouldn’t be surprised that most La Nina winters produce a very healthy Cascade snowpack.  In fact 12 of the last 13 moderate to strong La Nina events have given us well above average snowfall up at Government Camp (4,000′).

The short term forecast is sure looking nice.  Easterly flow will gradually lower our dewpoints the next 48 hours while a split in the upper-level flow in the Eastern Pacific keeps us mainly dry through Friday.  Tomorrow we could still see a shower like we did today, but models are indicating little or no mid-upper level cloud cover Thursday and Friday.  Combine that with a drying atmosphere down below and we could actually have some mild temps PLUS sunshine both of those days.  Because of that I kept Thursday’s high temp at 60 degrees.

The pattern shifts over the weekend into one with an upper level ridge in the eastern Pacific with systems sliding down over us from the northwest.  That’s a cool pattern, but if the ridge is too close, not a real wet pattern.  Each model has been different Monday and beyond, with the operational ECMWF one of the coldest solutions still for Tuesday-Wednesday.  I do finally expect some decent mountain snowfall Sunday-Monday.

The strong system shown on models for this coming Saturday just two nights ago is gone.  Actually it was gone only 12 hours later but I was too busy to blog yesterday afternoon.

The threat of really cold weather (snow down well below 2,000′) is gone for now too.  Although last night’s 6z GFS showed an arctic blast at about 320 hours…yes only 13 days away.  But one can expect 10-15 day maps to flip around from day-to-day.

This entry was posted on Tuesday, November 8th, 2011 at 9:28 pm and is filed under Weather. You can follow any responses to this entry through the RSS 2.0 feed. Both comments and pings are currently closed.