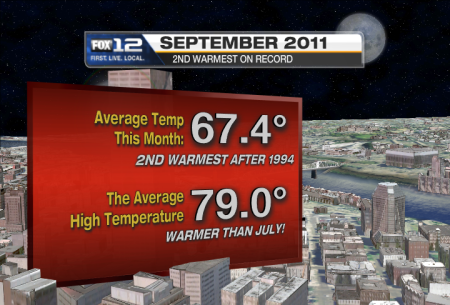 Now that we have today’s high and low temperature in, we can confidently say the average temperature will be 67.4 degrees, which just barely edges out 1991 to make September 2011 the 2nd warmest on record here in Portland.  Even more interesting was the average high of 79 degrees, which was warmer than July’s average!  That shows (once again) how chilly the first half of summer was.  That 79 is not in the top 5 though.  We’ve had several other Septembers with the average high temperature around 80, but the lows were cooler.  So the unusually warm nights really did it this time around.

This entry was posted on Friday, September 30th, 2011 at 6:14 pm and is filed under Weather. You can follow any responses to this entry through the RSS 2.0 feed. Both comments and pings are currently closed.