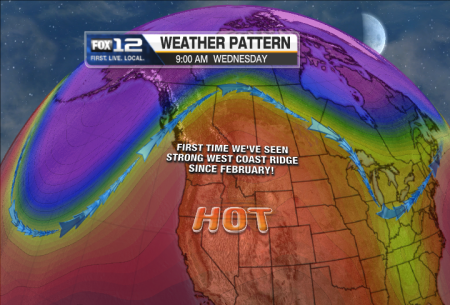 Our models have been very consistent the past few days showing the largest weather pattern change we’ve seen in 7 months.  As mentioned NUMEROUS times since March or so, the West Coast has been dominated by some sort of cool upper-level troughing.  During the last half of August this trough has mostly disappeared (not counting this first 3 days of this work week of course).  That allowed temperatures to average out to “normal” for this month for the first time since January.  But now it appears a strong upper-level ridge will build over us and stick around for quite a while.  Most impressive is that all models have the same pattern change, so we have quite high confidence in the big change.

The obvious question would be “didn’t we have major pattern change give us 96 degrees about two weeks ago?“.  We almost did, but the ridging was a bit to our east, and notice the real hot weather only lasted a couple of days at most.  So then the next question might be “just how hot is it going to get?“.  The short answer is that it probably won’t get much above 90 degrees in the next 6-7 days; partially due to the much longer nights and lower sun angle in early September compared to July and the first half of August.  And 90 degrees in September sure doesn’t feel like 90 in midsummer.  That’s due to that lower sun angle and long nights as well.  Temperatures rise and fall quickly in early Fall plus nights are significantly cooler as well.  I should point out we expect it to be very dry (low relative humidity) during this warm spell.

Some models are showing an even warmer pattern that would push us up into record warm territory next Wednesday or Thursday, but that’s a ways off.

The main point is that we have an extended period of very warm or hot September weather on tap, probably 7 days or more.  That includes a cloudless Labor Day Weekend in just about the entire Pacific Northwest.  There may be some low clouds at the ocean beaches by Monday, otherwise cloudless and warm there Saturday and Sunday too.

This entry was posted on Wednesday, August 31st, 2011 at 11:09 pm and is filed under Weather. You can follow any responses to this entry through the RSS 2.0 feed. Both comments and pings are currently closed.