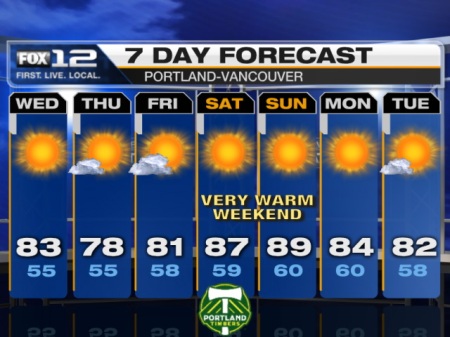 Well, it took until mid-August, but it appears the warmest/longest stretch of weather so far this summer is here.

As of now, I don’t see any sort of heatwave or real hot weather; by that I mean temps well above 90 degrees.

The change is that models are  in general agreement for the first time in months the upper-level trough along the West Coast is going away for awhile.  That’s over the next 7-10 days.  I’m a bit concerned the ECMWF (Euro) is the “flattest” model showing westerly upper level flow much closer to us next week; that would keep temps near normal instead.  The ECMWF has done much better than the GFS the last couple months.

Other than that, the weather is sure dull lately.  This is just about the deadest summer I can remember in my 18 years forecasting weather on television.  Think about it, there have been no significant thunderstorm outbreaks (west OR east of the Cascades), no heat waves, and no significant forest/range fires to report on.

This entry was posted on Tuesday, August 16th, 2011 at 10:53 pm and is filed under Weather. You can follow any responses to this entry through the RSS 2.0 feed. Both comments and pings are currently closed.