An impressive line of showers moved through the eastside metro area between 2:30-3:30pm.  One turned particularly strong over Parkrose and Government Island, passing directly over the NWS office.  Notice the image above shows the radar reflectivity, with 62 dbz showing up in the pink area.  But there’s more…definite rotation with this storm today.  Check out the “shear tracks” on our radar system, showing areas where there was directional shear in the atmosphere: 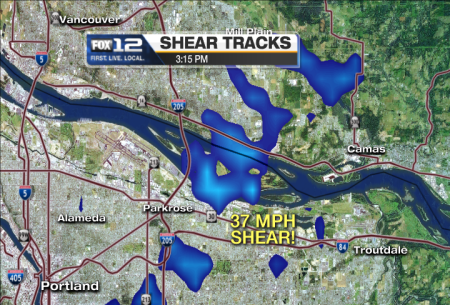 37 mph is pretty impressive for us, in fact I only saw 22 mph shear when a funnel cloud showed up over Milwaukie about a month ago.  So there could easily have been a funnel cloud or weak tornado over the Columbia River or anywhere just east of I-205 today.  Of course 30 minutes later the storm is weaker and already in the Cascades.  Classic west side “here one minute, gone the next” funnel cloud producer.  But so far we’ve received no reports…

This entry was posted on Wednesday, May 25th, 2011 at 3:57 pm and is filed under Weather. You can follow any responses to this entry through the RSS 2.0 feed. Both comments and pings are currently closed.

46 Responses to Almost a Funnel Cloud!