Record Snow in The West, and Possible Flooding 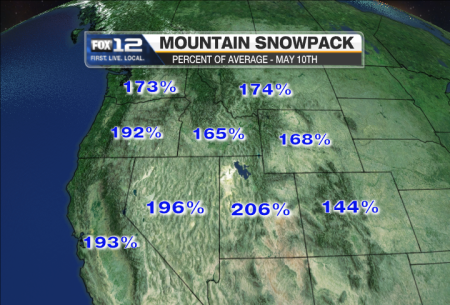 Will there be flooding in the next month?  Well, portions of the NE Oregon mountains and other parts of the West have their heaviest ever snowpack on the ground (Snow Water Equivalent) for early May.  This is due to the unusually cool and wet spring, plus a big winter for snow to our south and east.  Basically the spring melt season has been delayed dramatically and some spots actually GAINED snowpack in the last month instead of melting some.  More on that farther down the page.  As a result, NRCS and NOAA’s River Forecast Centers say there will probably be some flooding in portions of the Great Basin (SE Oregon, Nevada, Utah, and parts of Southern Idaho) at some point over the next month.  It’ll probably happen when we get our first big and hot ridge of high pressure across the West.  That could be in 7-10 days, or a month from now…who knows.  I remember 1983 when Wasatch Range rivers were channeled right through downtown Salt Lake City streets with sandbags…very cool video, but damaging of course.  The Great Salt Lake rose quite a bit too and caused some flooding.  Harney/Malheur Lakes in SE Oregon will be ones to watch too.

Here in western Oregon the flood threat is low, BUT, rivers will be running very high and cold as soon as temps warm.  I can only imagine the zoo on the Sandy and Clackamas rivers with the first hot spell!  The forecast for the Columbia River at The Dalles and Willamette River at Salem is 120-130% of normal April-September flow.  That’s 20-30% more water than average flowing past those spots.

It’ll be a late start to the camping season in the Cascades since the snow is slow to melt.  Snow depth gauges show 21″ on the ground still at Clear Lake Campground (the one near Mt. Hood), just a few inches in the Timothy Lake area, and somewhere between 30-60″ still on the ground near Lost Lake.  Check out the graph below from the NRCS.  It’s the “Blazed Alder” SNOTEL site, just southwest of Bull Run Lake and Lost Lake, maybe 8 miles NW of the summit of Mt. Hood. 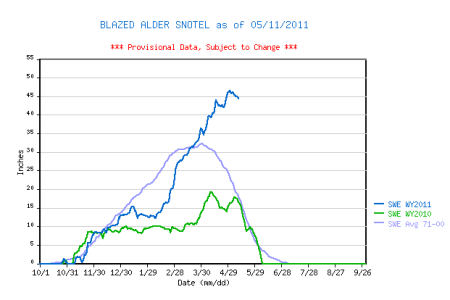 The light blue line is the average snow water equivalent measurement as we go through each Fall, Winter, and Spring.  Note the average maximum snowpack is right around April 1st in the “normal” year.  Then in later April and May the snowpack totally collapses (melts quickly) at that 3,600′ elevation.  In an average year at this site it’s pretty much gone by early June.  This year (darker blue line) we’ve gone a totally opposite direction with a huge increase in April.  In the end, this La Nina wet season WAS a huge snow producer, but just delayed by 1-2 months!  The green line is last year…well below average during the El Nino winter, but the very wet end to Spring delayed the melt in the higher elevations last May/June.