Plenty of Water For Summer 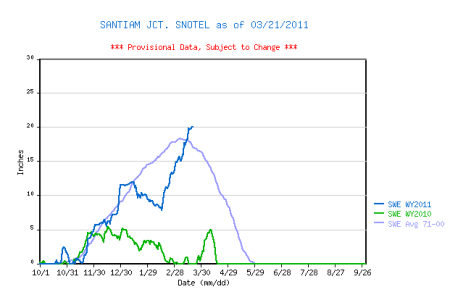 The mountain snowpack has made a tremendous comeback the last 4 weeks.  You may remember that through January and the first half of February we saw warm rain or dry sunshine most of the time up in the Cascades.

How things have changed…

4 weeks of cold and wet storms (with occasional short breaks too of course) have brought all Oregon river basins up to or above average for this time of year.  The best is the southern half of the state with 120-130% of average “snow water equivalent” on the ground.  That means there is an above average “storage” of water up in the mountains.

Take a look at the graph above.  It’s from about the 3,000′ elevation just west of Santiam Pass.  The smooth-looking blue line is the 30 year average snow water equivalent at that site for each winter.  Note the snowpack (at that elevation) tends to peak in early March.  Higher areas like Timberline Lodge follow 3-4 weeks later (on average).  The green line is last winter…remember the really bad El Nino year?  That’s it right there in green.  Then the jaggy blue line is this past winter up until today.  We were doing just fine until about the 2nd week of January, then the warm rains and dry weather took a real toll on the snowpack.  By Valentine’s Day there was only a little over half the normal snowpack on the ground.  Now you see what happened in the last 4 weeks!  The total just keeps going up and up.

Looking at the maps for the next 7+ days, I see no dramatic change.  In fact it gets wetter Thursday through the upcoming weekend.  There is a hint that maybe we could see a brief break about 8 days away…just 8 days away!  Like those arctic blasts.

My garden/yard is showing signs of the late growing season start.  Lawn hasn’t even attempted to grow, buds on trees and bushes look more like late February, and even the daffodils haven’t started yet.

By the way, I’ll be taking a 10 day vacation starting Thursday and I’ll be “shutting down” the weather blog during that time.  So if there’s someone you REALLY have to communicate with, make sure you get their email address or Facebook name by Wednesday.  It’ll just be better to have the comments off when I’ll be away from the computer for awhile.

This entry was posted on Monday, March 21st, 2011 at 11:14 pm and is filed under Weather. You can follow any responses to this entry through the RSS 2.0 feed. Both comments and pings are currently closed.

95 Responses to Plenty of Water For Summer