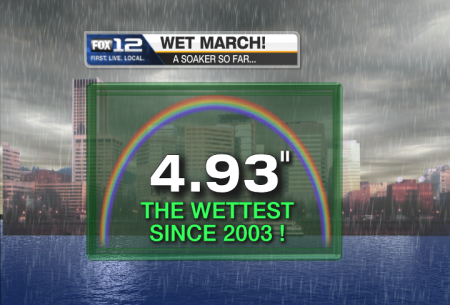 Even if the rain stopped falling right now, this would be considered an unusually wet March.  As of 10pm we are up to 4.93″ of rain so far, and we’ll probably go over the 5″ mark later tonight or tomorrow afternoon with a few more showers.  So that makes 5″ by the 19th…only 11 days to go to April!

The forecasting becomes a real pain now the next 7 days.  It’s a classic pattern of upper-level systems diving down towards California, while sending disturbances north over us.  Models typically don’t handle the small waves of showers well.  As a result we changed our 7 Day Forecas wording to “MORE DRY THAN WET” instead of “MAINLY DRY”.  I still believe there won’t be a ton of rain during the next week, but if we get a deformation zone (maybe Monday?), that can give a cool and drippy day.  That’s as opposed to afternoon showers (tomorrow and probably Sunday).

Not much else to talk about for this weekend.  My favorite moment today was when I read that RADIATION FROM NUKE PLANT REACHES WEST COAST in some sort of online headline.  Then I read the details:  it was detectable in Sacramento, at about one-millionth the dose we regularly get from bricks, rocks, the sun, and other natural sources.  Why isn’t the media telling us about the danger in all those rocks and bricks!!!  I’m going to cloister myself inside my house over the weekend just in case the sun tries to shine on me or a rock can see me…

This entry was posted on Friday, March 18th, 2011 at 10:35 pm and is filed under Weather. You can follow any responses to this entry through the RSS 2.0 feed. Both comments and pings are currently closed.

198 Responses to A Very Wet March