After checking all the models and maps, plus the calendar of course, I decided it was time to “Cancel” Winter.  At least cancel it in the lowest elevations.  I’ve mentioned before that REAL winter here in the lowest elevations of Western Oregon and Washington is maybe November 15th-February 15th.  That could be defined by the chance of getting significant snowfall, freezing rain, or a cold blast out of Canada.  Yes, there have been a few arctic blasts slightly outside of that period, but most years we don’t see it earlier or later than that period.  This was the year that it stayed late (last week!).  But after checking out future models, it’s obvious that “West Side Spring” is about to begin.  That means plenty of rain, but slightly milder temperatures, and little/no threat of a hard freeze. 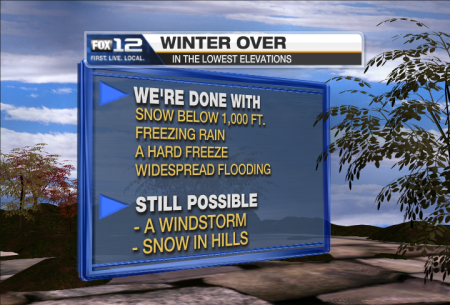 In the past we’ve seen windstorms in March…warmer temps plus better mixing seems to help that along.  And the upper-level atmosphere lags behind the surface temps for the next month or so, meaning that it’s still relatively easy to get snow down to 1,500′ or a bit lower.  But it becomes ALMOST impossible to get snow down to sea level after about March 10th.  For sure we won’t see an icy morning commute that severely impacts traffic.  With the decrease in precipitation, we also generally don’t see any real river flooding between now and November.

For the gardeners, this means it’s safe to plant the really cold weather stuff like peas, and you could put pots outside, as long as you bring them in on frosty nights.

For the weather geeks like me…very slow the next few days.  Next decent cold front (but a fast mover) is Friday afternoon/evening.

The coastal wind was very impressive this morning.  It didn’t last long, but there were numerous places with gusts in the 70-80 mph range.  Sea Lion Caves and Cape Foulweather hit 88 mph!