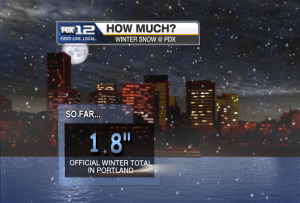 Real calm weatherwise this evening…the calm after the “storm” I suppose.

Cold and dry now as the last flurries seem to be just about gone on radar and east wind is picking up across the Metro area.  Our dewpoint just dropped about 5 degrees in the last hour at the station.  We’re freezing up nicely across the region as the modified arctic airmass moves in.  The low dewpoints will help dry out roads, so I don’t expect a major huge mess for the morning commute; just areas of ice and some leftover snow on the hills or shady spots.

I’m really looking forward to the sunshine the next two days.  Though it’ll be chilly (and breezy tomorrow), it’ll be nice to be blinded by the bright late February sun.  Speaking of calming wind, perfect radiational cooling should drop us to right around 20 tomorrow night.  No snow cover to help for most of us after another sunny day in the 30s, but it’ll still be unusually cold for this late in the season.

I’m keeping an eye on the transition into wet weather…appears to be Saturday evening or night as precipitation arrives.  Good chance of a snow start with real nice evaporational cooling, but southwest wind picking up during the night means it can’t last that long.  There is not dry/cold air coming in from the east at that point.  In those situations it’s usually not a significant snow event.  I also notice the precipiation amounts are quite light for the first 12 hours; that doesn’t help if you want snow either.  The main message is that it doesn’t look real exciting right now, we should wake up to rain on Sunday morning.  At best rain with some leftover snow melting on the ground.

I’m also keeping a close eye on a deep low forecast to move north up the coastline late next Tuesday.  The last two runs of the GFS have been impressive, especially the latest at 00z.

Here are the snow total maps from today…click for a better view.  Notice how Clark County had more than the top of the West Hills!

This entry was posted on Thursday, February 24th, 2011 at 9:28 pm and is filed under Weather. You can follow any responses to this entry through the RSS 2.0 feed. Both comments and pings are currently closed.

297 Responses to Cold Air Moving In