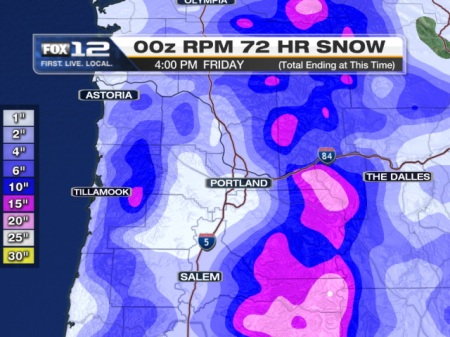 Considering there is a Winter Storm Warning out for our area within 9 hours, the weather sure is dead this evening!  It’s chilly, a bit breezy, and there are just a few scattered showers roaming around.  It’ll stay that way for a few more hours…

Not much has changed the last 24-48 hours model-wise for this upcoming event.  Looks like we’re pretty much locked in now.  An upper-level shortwave is moving down the B.C. coastline and that should provide the enhancement to the showers for the morning commute.  I forecast a Trace to 1″ for the morning, then of course temps well above freezing the rest of the day (until sunset at least).  In fact I don’t think tomorrow will be dramatically different than today except for more showers and not as many sunbreaks.  Temps should slightly cooler too, just barely getting above 40 degrees in the sunbreaks.  Either way, I don’t see any big driving concerns between 9am and sometime after dark.

That’s a good reason I wish the NWS wouldn’t have started the Winter Storm Warning until after dark tomorrow, or at least until late afternoon.  It’s going to look a bit silly when we’re out driving around midday on either wet or dry roads, while in the middle of a “Winter Storm”.  Not sure what the thinking was on that.  But I totally agree that once temps drop again after dark it’ll be easy to get accumulations again.

Then I see about a 24-30 hour window (6pm tomorrow-10pm Thursday) in which we could see widespread sticking snow.  It’s showtime!  That’s because it’ll be that rare, magical, fantasmic, Disney-Like period when the moisture and cold will be over us at the same time…magical…that time we all stand united as weather geeks, holding hands…fantasies of a big dump of snow…December 2008…February 1995…

Unfortunately I’m forecasting 1-3″ in the lowest elevations for that period.  If we get lucky maybe 4″, but I think even that is the highest we would see at PDX.  So why such a small amount?  I think it’ll be plenty cold enough, but models are just not all that moist.  Our RPM shows (above) maybe 2″ snow if we’re lucky, the WRF-GFS barely has that, and the NAM-MM5 has very little as well.  I think all of them MIGHT be underestimating the moisture availability, but they’ve done just fine so far (today and this evening), so I don’t see any reason to doubt it for now.

The arctic air comes pouring in Thursday night and Friday; not a huge east wind event by any means.  In fact the east wind should be gone by Saturday morning, which could set us up for a really cold low temperature (15-20) IF we get 4″ or more snow on the ground by Thursday night.  I figure 1-2″ of that would melt off Friday afternoon.  Otherwise maybe just 20-25 degrees without snow cover.

Saturday looks dead, although models now rushing moisture in here Saturday evening.  If it starts as snow it won’t last long since flow will be back to onshore…will moisten and warm quickly.  Then it’s on to normal March rain next week.