Only a weather geek can get pumped about some incredibly high dewpoints…but even regular folks can understand how amazingly humid it has been the last 24 hours in the Pacific Northwest.  Sure, it was humid a couple weeks ago, which was very unusual for mid September. 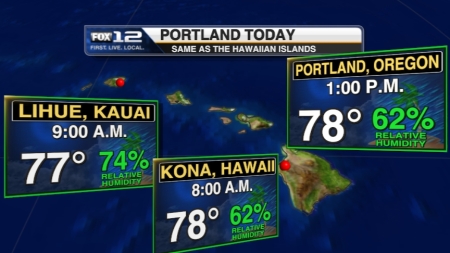 But now even worse?  Check out some of the dewpoints this evening (a direct measure of the amount of water vapor in the air).  As of 9pm many areas are hitting their highest of this warm season so far.  PDX has hit 67 (not to wildly high), but Scappoose-68, Olympia-69, Tillamook-72!, Lincoln City-71, Vancouver-67, Troutdale/Hillsboro-66, Hood River-66 (very rare).  I could swear such high humidity/dewpoints have become more common the last 4-5 years, but don’t have any hard facts to back it up.  That would take a lot of searching through weather records.  I can say that I looked through the last 6 summers at PDX and only last summer (2009) for a few hours did we hit a dewpoint of 67 & 68 at the end of the heat wave.  The closest to that was a dewpoint of 70-72 during that extremely humid event late July 2006.  So it’s fair to say that this is one of the 3 most humid periods in the last 6 years.

You can see the reason and source for the tropical moisture on this precipitable water loop…I found this on Cliff Mass’s blog:  http://cimss.ssec.wisc.edu/tropic/real-time/tpw2/epac/main.html

Looking ahead, some really nice weather on tap for the rest of the week.  For starters, the passage of a wind shift line/cold front tomorrow evening brings the wind around to the north, pushing the deep tropical moisture out of here.  That spells a sharp end of our “sweaty spell”.  Model cross-sections show it really well as well as MOS data.  The the northerly wind turns northeast and easterly Wednesday afternoon through Thursday.  Dewpoints may drop into the 40s as the atmosphere warms up again.  So the last two days of the month should give us a very typical late September warm spell.  Overnight lows should drop down to around 50 in the city as well.

A weak system moves through our warm ridge Friday, but then it rebounds Saturday and Sunday for a nice weekend.  No sign of stormy weather in sight (the first few days of October).

By the way, I should point out that at Kona and Lihue, afternoon temperatures were about the same at PDX, but just slightly more humid, so in the end we WERE much the same as the Hawaiian Islands today!

This entry was posted on Monday, September 27th, 2010 at 9:15 pm and is filed under Weather. You can follow any responses to this entry through the RSS 2.0 feed. Both comments and pings are currently closed.