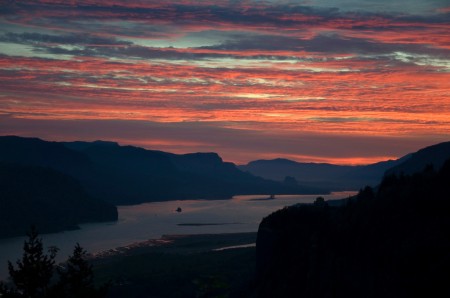 Now that’s a sunrise Tyler Mode!  He sent us this picture.  It’s the view from Women’s Forum State Park near Corbett down to Crown Point and all the way up the Gorge to Cascade Locks.  I live about 2 miles SE of that location, but I was asleep until 8am so apparently I missed out…

Moving on, looks like some interesting weather the next 48 hours.  First, the rain is definitely moving in too fast this afternoon.  As I write, heavy rain is pummeling the Willamette Valley from the south Metro area down to Corvallis.  No lightning strikes with any of this or the heavy showers along the Coast.    This is associated with a deep upper-level low pressure area out in the Eastern Pacific.  We are on the far eastern edge of it’s circulation; the warm southerly/southwesterly flow side.  We’ll be on the warm side all the way through Friday afternoon.  That means lots of moisture available for rain through the overnight hours tonight for starters.  I wouldn’t be surprised to see .50″ totals even inland by morning.

As I mentioned on last night’s broadcast, timing will be tricky for the following waves of rain, but it appears one just nicks the North Oregon Coast tomorrow afternoon/evening, largely leaving the rest of Western Oregon dry.  So we dry out tomorrow and get some sunbreaks too, even while 850mb temps rise up to around +12 to +13.  This adds up to a warm day.  Little to no wind and dewpoints around 60 mean it’ll feel quite humid too.  In general it’s going to be unusually humid (warm nights too) tonight through Friday.

Then Friday looks like it could be a fun day.  A cold front moves inland at some point in the late afternoon/evening.  But BEFORE that time, we get light easterly flow from the surface to around 3,000′, warm southerly flow above that with 850mb temps around +13, plus at least partly cloudy skies through early afternoon.  That says “warm” to me; similar to one of those spring days just ahead of a cold front where we see temps rise more than expected.  We could hit 80 Friday!  We should at least hit 75…it’s all dependent on cloud cover.  So we have a warm and humid atmosphere…precipitable water up around 1.30″ or so, lifted index dropping below zero, and some decent CAPE west of the Cascades.  Then a cold front sweeps in from the west or southwest during peak heating time; oh, and a surge of cooler marine air from the southwest too.  Can you say “afternoon thunderstorms” kids?  Sure seems like the ingredients are lining up well.  We don’t often get a nice combination like that.

The upper low offshore opens up and moves onto the West Coast over the weekend; more showers at times, but cooler temps.