Breaking Weather News!  A shower sat almost directly over PDX between 8:10 & 9pm…1.03″ rainfall fell in just 1 hour.  That is the heaviest rain that has ever fallen in 1 hour at PDX!  But 1-2 miles away the rain was far lighter.  Talk about a freak event eh?

The previous record was set just 2 years ago with thunderstorms on Memorial Day Weekend.  That was .93″ in one hour. 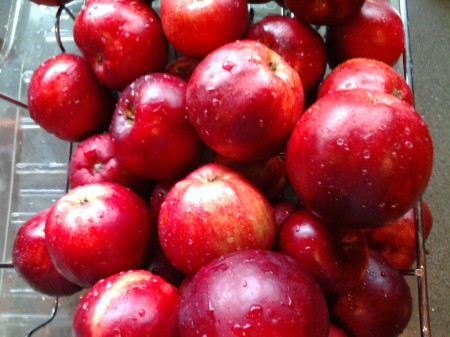 “Mark, you’ve got some nice-looking apples!”

That’s what Stephanie said this afternoon (or something very close to that) as I was bragging about my bounteous harvest from the land this morning.  I think I’ve got some nice looking apples too.  For the first time I actually had a little crop from 3 of 8 apple trees I’ve planted in the last 2-6 years.  The deer have finally been kept out by a very tall fence.  The rest of the trees will come along in future seasons.  This is the William’s Pride variety.  There’s a weather lesson here;  usually this variety ripens in early-mid August.  This year, as with all the berries and other apples, everything is still about 3 weeks behind at my home.  That’s of course due to the cool late spring/early summer, and cool summer itself.  Actually I’m surprised they did this well since it rained almost continuosly from bloom until a month after.  By the way, they no longer exist, I made them all into applesauce by noon.

Staying with the weather and garden theme tonight;  a soaking one week ago and now another soaking this evening plus cool weather through the next 7 days means plants won’t need nearly as much water as they might during a warm and dry September.

What a soaking today.  Hillsboro is the winner of the official stations so far with just over .80″.  But a 2nd area of up to 1.00″ is centered up around the east side of Vancouver & Orchards area.  A bit more to come in the overnight hours as a 558dm upper-level low is centered right over the Willapa Hills at this hour.  That circulation will be over us through the morning hours, then take all day tomorrow to cross Oregon and Washington as more of an open trough.  The result is very slow improvement tomorrow, with cooler/cloudier weather over in Eastern Oregon.

Thursday through the weekend should be better with the main flow back up to our north.  Temps still remain below normal through early next week as another trough decides to dig down to the south, but farther offshore.  That should keep us dry (just barely).  There is no sign of ridging or a warm atmosphere in the next 7+ days, which puts us into the 2nd half of September.  So I decided to actually put the words “Summer is Over” on a graphic tonight.  Slightly dangerous but probably far safer to make that pronouncement now instead of late June (couldn’t avoid that one).

A nice line of heavy showers is SLOWLY moving west to east across the metro area.  As of 4:30pm the only dry spots are east of I-205.  You’ll all get soaked eventually.  Hillsboro Airport has seen .81″ since late morning, almost 1/2 inch of that was from 3-4pm.