I love messing up a forecast like today’s.  Technically I haven’t put out a forecast since Friday, but I expected rain today just like everyone else, so I won’t run away from that.  But I planned to be inside all morning; instead got a nice bike ride in plus a bit of overdue yardwork.

Today’s rain headed south…look at the totals.  Around .50-.75″ soaking down in the central/southern Valley.  That plus the .02″ that fell in Hillsboro gave Eugene and that city their first rain in 57 days!  According to “HIO-Phil”, this was the 5th longest dry spell in Hillsboro’s history.  Pretty impressive considering how it looked all during the month of June.  Really, if someone would have predicted that back then most of us would have laughed.  I’m always amazed at how quickly the rain faucet can suddenly shut off in early summer. 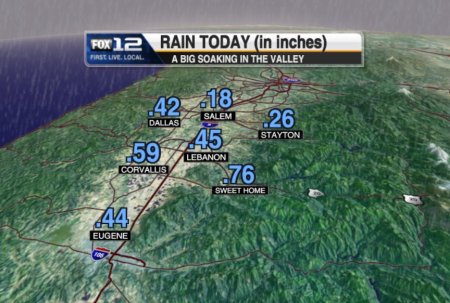 A nice plume of subtropical moisture is streaming towards the Pacific Northwest right now.  Actually it’s aimed a bit to our north, but it sure looks like the wet season.  These systems that come in over the top of a ridge to our west (northwesterly upper-level flow) tend to be gloomy and wet.  So August will end tomorrow very unlike the rest of the month.  Not a ton of rain here in the lowlands; maybe just .05-.15″ maximum by evening.  But then a 2nd juicier wave moves inland tomorrow night.  Maybe another .10-.25″ with that one.  So POSSIBLY up to .50″ here in the lowlands, probably less west side of the Valley and more up in the foothills.  A nice wetting rain for the first time in 8+ weeks.

I like the change on Thursday.  Upper-level ridging pops up very quickly Wednesday night and Thursday.  We go from gloomy skies midday Wednesday to good offshore flow and a much warmer airmass Thursday.  We’ll make a change from October back to August in just one day.  I like the variable weather myself…the air in September is always so fresh and cool after rain, then the warmth following always feels great.

Not much else going on…pretty quiet in here.  Wayne and I are working together for the first time since mid-July.  Our vacations didn’t match up.  But Shauna had to leave, so the “family” won’t be back together for awhile longer.