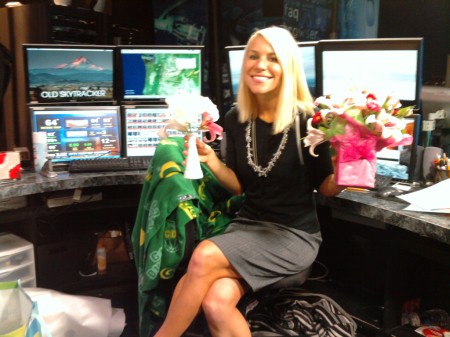 Stephanie Kralevich’s birthday is today…I thought I’d be clever and pick her some nice-smelling lilies from the garden and bring them in (it’s the thought that counts!).  But then I show up and there’s a much larger pile of flowers already there!  She was nice enough to hold up both for a slightly blurry cell-phone pic.   Wish her a happy birthday yourself if you are a Facebook or Twitter person.   We work together about 4 hours each weekday and she’s a wonderful co-worker.  You just have to ignore the pile of food, snuggies, purses etc…  We do have TWO sides to the weather center!

There IS a weather angle to her birthday.  Here’s a picture from Stephanie’s 3rd birthday party…that would be August 9, 1981.  Sound familiar?  That was the 105 degree day inbetween the two 107 degree days.  She looks hot in these pictures (the red face) doesn’t she?  Shoveling that birthday cake right on in…

We are doing some major open-model surgery to the 7 Day forecast right now…apparently you can ignore almost everything I said about the long range forecast in last night’s 10pm show!

This entry was posted on Monday, August 9th, 2010 at 3:02 pm and is filed under Weather. You can follow any responses to this entry through the RSS 2.0 feed. Both comments and pings are currently closed.