The Faucet Shuts Off 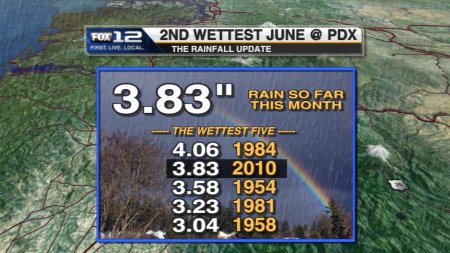 The Live Radar has been a reliable old friend lately…we’ve seen measurable rain 24 of the last 26 days here in Portland.  Whew!  But that is about to end, in fact only a few light showers are left on the SE side of the Metro area at 10:30pm.  We are now in 2nd place for the June rainfall record at PDX.  Even though we only need about a quarter inch to break the record, that appears very unlikely in the next 7 days…that’s right, no rain likely through the end of next week.  Time to dry out and warm up!

Now this doesn’t mean the next 7 days will be all sunny though; don’t think we’ll suddenly be in the 80s for the next week.  We get a nice ridge of high pressure overhead during the weekend with 500mb heights up over 580dm, then the ridge is flattened out by a weak trough that lingers through much of next week.  So real warm weather still on tap for the weekend.  We might only get TO 80 degrees on Sunday because a northwesterly marine push kicks in during the afternoon.  Timing is everything on this, so if it’s delayed we could be 82, if it rushes in we only get to 76 maybe.  One thing I’ve noticed over the years is that northwest marine pushes, as opposed to southwest pushes, generally give us far less low cloud cover.  So hopefully I haven’t overdone the mostly cloudy skies for Monday…much cooler either way though.  Then with a weak, but probably dry, trough over us Tuesday and beyond we should see very nice seasonal weather…highs 70-75 degrees and DRY!

This entry was posted on Thursday, June 10th, 2010 at 10:50 pm and is filed under Weather. You can follow any responses to this entry through the RSS 2.0 feed. Both comments and pings are currently closed.

39 Responses to The Faucet Shuts Off