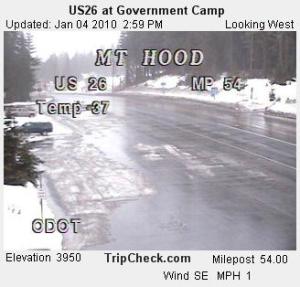 It may not feel too warm here in the Metro Area due to cool east wind coming through the Gorge, but it’s a very warm airmass overhead and away from the Gorge as well.  I see Medford is 62 at this hour and Salem is 56!  Along with low ceilings and constant “slop” the next 48 hours, it’ll be a bit gloomy.

Looks like it’s raining at the ski areas…40 degrees at Gov’t Camp right now too.  The ODOT sensor reads 3 degrees too high.  Snow levels have moved up to the 6,000-7,000′ level.    They will stay in that range through Wednesday, maybe dipping a bit on Wednesday itself.  I think the lower areas may lose a foot of snow…not good since it’s a bit thin down there anyway.  Stephanie Kralevich just told me Mirror Lake snowshoeing was good yesterday, but the snowpack was noticeably low.  For you skiers and snowboarders the long range forecast doesn’t help much either.  We go from warm and rainy to mild/warm and dry later Wednesday through early Friday.  Then some more rain or possibly snow higher up Friday/early Saturday.  The rest of the weekend may just be dry but mild.  In general the next 7-10 days look mild in the mountains as ridging holds over or just east of the Pacific Northwest.

One would think all this warm air above could translate to some 55-60 degree days down here in the Valleys, but that won’t be the case after tomorrow.  Similar temps tomorrow turn much chillier Wednesday through the weekend.  We get a “backdoor” surge of colder/dry air through the Gorge on Wednesday, giving us a continental airmass the rest of the week.  It’s a pretty chilly airmass, enough to keep highs in the 32-38 degree range in the Gorge and 40-45 degree range in the Metro Area.  The cold nights will return in areas away from the Gorge too.  That east-west gradient looks very impressive Wednesday and Thursday.  WRF-GFS shows 10 millibars and also a very quick rise to the gradient late Tuesday night through Wednesday midday.  It’ll probably hang on strong through the weekend too, so if you are in the east wind blast zone get ready for many days of that cold wind!

The good news is that January 1st is the halfway point for the east wind season.  Each year the possibility for a strong eastside inversion disappears right after the first of March; the sun gets strong enough to overcome the cooling over there.  Windsurfers look forward to the return of the west wind with each passing March cold front too.

Just for fun, I found this nugget off a national news site from Accu-Weather:

…”Nearly the entire eastern half of the United States is enduring bitterly cold temperatures not experienced since 1985. Even Florida, which has been hovering around freezing levels overnight recently, is also feeling the almost-nationwide chill”…

Remember January 1985?  I do.  That was the month where it hardly did anything in Portland…A total of .06″ rainfall, east wind and fog/sun in the lowlands.  Temps in the 50s and sunny most days at the ski resorts were the rule as a large ridge was parked over us the entire month.  I hope that doesn’t happen this month.