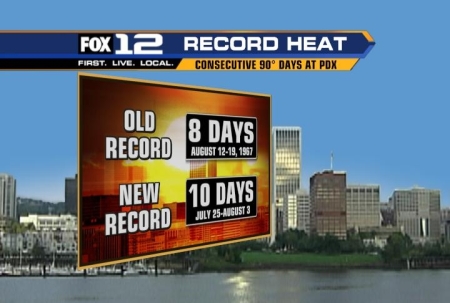 Yesterday our official high was 85 degrees.  That marked the end of our 90+ run at TEN consecutive days!  The old record was set back in 1967 and stood at 8 days.  As most of you already know we also broke numerous other daily records for high temps.

I am not one who likes hot weather but I am glad we got something out of this by breaking the record.  Now some may use this heat wave record as proof of Global Warming/Climate change, I think one event for anything is not enough to put a nail in the coffin.  If you went by that logic we would have been headed for the next ice age during Arctic Blast 2008-2009, only 8 months ago.

Now for the forecast….

I don’t see anything that might signal a “Mark’s on Vacation” dooms day event but the big story is that we are going to get cold! (That’s relative)  Once this upper level low down in Cali moves inland we will see nice, cool temps here in the valley(below average) and near average temps on the coast.  Oh and a chance of showers, best chance on Friday but not out of the woods over the weekend yet.  I will keep a close look to see if that might change.  I don’t see any threat for thunderstorms even thought the flow for kicking them our way looks to be improving with the ULL moving inland.  Oh Well.