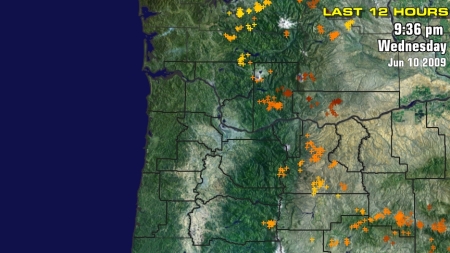 All Lightning Strikes Remained in the Cascades Again Today

Another relatively slow day in the weather center; especially considering that there was plenty of convection around the region.  The problem was that it was all over and east of the Cascades…even with easterly flow.  All storms died as they headed west of the Cascade crest and ran into the cool marine air in place over us.

We are in a very messy forecasting pattern through the weekend.  An elongated upper-trough is basically straddling Oregon, giving easterly flow in the upper atmosphere overhead and westerly flow across the lower half of the state.  Low level onshore flow continues in Oregon with very light flow up in Washington.  I see western Washington has now had two days of very warm temps, Seattle tied a record high of 76 degrees.  Of course one wonders how the record is only 76 degrees, but it is a cooler climate up there in summertime.
I don’t see any significant changes through Saturday although maybe we’ll have a more organized area of showers move through late Friday or Saturday.  Models seem to be hinting at that.  As of now though I have no great appreciation for the intricacies of mesoscale modeling of our current situation.
Mark Nelsen

This entry was posted on Wednesday, June 10th, 2009 at 9:58 pm and is filed under Weather. You can follow any responses to this entry through the RSS 2.0 feed. Both comments and pings are currently closed.